MUSEUM OF ARCHITECTURE BY ANTONIO DA SANGALLO THE YOUNGER 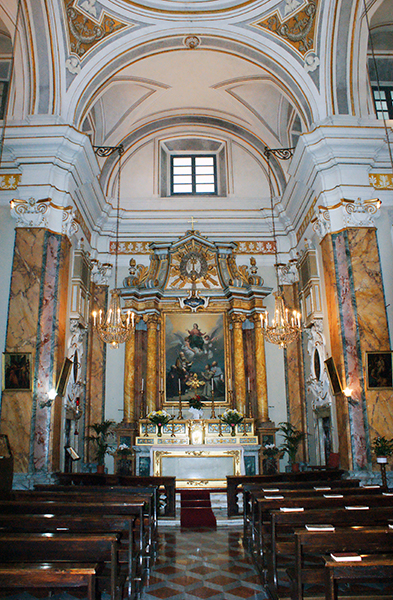 Study center used as a museum. The works for the preparation of the definitive version of the Museum of Architecture by Antonio da Sangallo the Younger began in 2006 with a first regional contribution thanks to which, in a couple of years, the rooms on the ground floor of the Rocca di Montefiascone were made usable and only partially set up.

MUSEUM OF ARCHITECTURE BY ANTONIO DA SANGALLO THE YOUNGER

THE BIRTH OF THE MUSEUM – THE WORKS

For the preparation of the definitive version of the Museum of Architecture by Antonio da Sangallo the Younger they began in 2006 with a first regional contribution thanks to which, in a couple of years, the rooms on the ground floor of the Rocca di Montefiascone were made accessible. and only partially set up. Thanks to an agreement between the Municipality and the Lazio Region, in 2007 it was decided to make the structure usable, well aware that, at that moment, the visitor could only be provided with an anticipation of the final design of the museum. It is no coincidence, in fact, that the municipal administration decided to “inaugurate” the structure (museum, archaeological excavations and pilgrim’s tower) completely free of charge, obtaining, also for this reason, a moderate success with the public. The participation in events of national resonance (for example the FAI spring days), has given the opportunity to make the new structure known to numerous guests who, often enthusiastically, have promoted cultural initiatives. With this policy, in less than two years, over six thousand visitors have known the premises of the museum inside the Rocca. A second regional funding, obtained thanks to a project carried out once again by the architect Simonetta Pitre assisted by the architect Cristiano Tabarrini (former Scientific Director of the Museum), gave new impetus to the work, and in 2009 the completion work resumed. Today the museum is completely set up and, after the first inspections carried out by the officials of the region with the representatives of the Museum System of Lake Bolsena, it is ready for the inauguration. In addition to being a place dedicated to the exhibition of objects and images, the museum was born with the natural vocation to become a study and documentation center of the famous Renaissance architect. Around the mid-1980s the first collection of documents was created, thanks to the acquisition by the municipality of Montefiascone, copies of over 1600 drawings from the “Sangallesca school”, (the originals are mainly kept in the Drawings Department and Prints of the Uffizi in Florence). Lately the collection has been augmented by original nineteenth-century drawings with reliefs of sangallesche architecture. The museum is part of the Regional Museum Organization and the Museum System of Lake Bolsena, as one of the most advanced from a technological point of view. The Museum is a treasure trove of knowledge with a high historical and technological content, designed to be enjoyed at its best by the most diverse visitors (from middle school pupils to university students, from the curious tourist to the learned scholar), placing them in the right position both the figure of the important Renaissance architect Antonio da Sangallo the Younger and, above all, the image of the city of Montefiascone.

Under the impulse of the architect Pitrè, a team made up of top-level personalities, has deepened his studies on the work of San Giorgio, while at the same time establishing relations with the entire national academic environment. The figure of Antonio da Sangallo the Younger was introduced by the art historian Livia Narcisi, who in the presentation room of the museum recounted the life, the training process and the main works of the Florentine architect. In the panel “Antonio in Firenze” the “training” is studied through the experience gained with a “wood master” and the architectural heritage of Filippo Brunelleschi. Talking about “Antonio in Rome”, the studies of “Roman antiquities” are presented through Vitruvius, the fundamental role of Paul III Farnese and collaborations with artists and architects of the “Roman Renaissance”. In the panel “The places of Antonio da Sangallo the Younger in the Heritage of San Pietro in Tuscia” the main interventions carried out in the Viterbo area are exhibited. The insights into the works of local interest were handled by the architect Cristiano Tabarrini, through the “virtual reworkings” of the San Gallo projects for the destroyed city of Castro. The Palazzo della Zecca and the majestic Palazzo dell’Hostaria-Palazzo Ducale have been reconstructed, as well as in a valuable wooden model, through an unprecedented virtual tour, to complete the exhibition of numerous projects for civil and religious buildings. The studies in this room have found natural development in the setting up of the room dedicated to Palaces and Civil Architecture and the more scientific room, the one dedicated to Construction Machinery and Construction Techniques. In another room of the museum are presented the construction machinery and the Construction Rules of the self-supporting domes of “flat bricks” of San Galliano origin. The curator of the room is Prof. arch. Massimo Ricci (internationally renowned university professor and consultant for UNESCO) who, in line with the studies on Brunelleschi’s architecture (the Dome of Santa Maria del Fiore in Florence, constitutes the archetype of the self-supporting domes built in the 16th century), he deepened his knowledge of domes through models and virtual reconstructions. The room preserves valuable models of domes (including that of Montedoro in Montefiascone) and construction machinery inspired by San Gallo. Theoretical lessons on civil architecture are deepened in the room curated by Prof. Gabriele Morolli, (Professor of History of Criticism and Architectural Literature at the Faculty of Architecture in Florence), through a “didactic path” focused on the cornerstones that every apprentice architect was called to make his own during his internship at any large Renaissance architectural workshop. A new, very accurate wooden model of the sangallesca version of Palazzo Farnese in Rome, flanks the existing plaster cast and completes the layout of the room. To complete the course, we find in-depth studies on Religious Architecture by Prof. Micaela Antonucci, professor at the University of Rome “Tor Vergata”. Through new didactic panels and unpublished films on the wooden model of St. Peter’s Basilica, the curator presents the different types of churches with a central plan and a basilica plan, built by Sangallo in Rome and throughout the Papal State. Within the museum itinerary, a new room has also been created in which, alongside some examples of the Sangallesque military architecture curated by Prof. Micaela Antonucci, the state of knowledge on the historical and architectural origins of the fortress of Montefiascone by the historian Dr. Gabriele Bartolozzi Casti.

MUSEUM OF TYPOGRAPHY AND PRINTING
14 September 2021